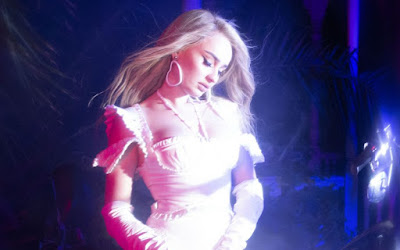 I know you think I’m going to say that I can’t support Kim Petras because she continues to choose to work with Dr. Luke, the infamous pop music producer whom Kesha accused of assault. That’s definitely a part of it. But there’s so much more beneath the surface concerning Kim Petras—the 26-year-old German-born pop singer who has risen to fame through music streaming services and social media. She’s very popular among the LGBTQ community, predominantly given that Petras is a transgender woman; this being the reason she has been credited as groundbreaking, since her trans identity is not the most interesting thing about her. But the fact that Petras is trans, and thus normalizes the notion of trans visibility, has led the majority of the pop music fandom—which consists largely of gay men—to give her more credit than she actually deserves. Many have referred to her as “saving pop music,” or being the future of pop. But in reality, she’s the past of pop.

I’m not going to pretend that I’m a fan of “real music” and that I’m above listening to the fun-loving bubblegum pop that Kim Petras makes. In fact, Petras’ brand of pop is my favorite kind of music to listen to. Whether it’s the eighties vibes on “Hillside Boys,” the auto-tuned but catchy nonetheless vocals on “All the Time,” the Paris Hilton dress-up fun on “I Don’t Want It At All,” or her best song to date “Heart to Break” (which I named one of the best songs of 2018), I love a cheesy pop song that just makes you want to sing and dance more than anyone. But I’m not about to claim that female singers who make this exact brand of pop—and who, historically, aren’t taken very seriously on a mainstream level because all they want to do is sing and dance—are necessarily pushing boundaries and are the future of pop. In order to fulfill the achievement of being the future of pop, pushing boundaries is a necessity, especially if you’re a woman. That’s just the world we live in. We wouldn’t have hailed Madonna the Queen of Pop if she hadn’t pushed the boundaries she’s pushed over the last thirty years. The same goes for Janet Jackson, Britney Spears, Rihanna, and any other era-defining pop star ever since the Beatles. But that also doesn’t mean that we have to devalue the female pop singers who are only interested in singing and dancing. They just tend to attract smaller followings—of mostly gays—and rarely make any significant mainstream impact. And if they do, it’s short-lived. (See also: Paula Abdul).

When we start calling someone like Kim Petras—who is one of many young female pop singers looking to ironically mimic the styles of their elders such as Madonna, Britney, and Kylie Minogue, without pushing any new boundaries—the “future of pop,” merely because she’s trans and she makes good dance-pop, it feels naïve and immature. Especially considering that Petras isn’t signed to a mainstream label, has yet to score a mainstream hit, and that most of the press that claims Petras as groundbreaking or the future of pop is written by gay men who, as I can attest, are a little too biased in this area to be making sweeping predictions that Kim Petras is the future of pop music without taking into account some clear, undeniable facts. Even Petras comes across as rather unprepared to fit into the shoes of someone who many claim will change the music industry. As one review of her full-length debut Clarity puts, her decision to work with Dr. Luke should not be excused but also shouldn’t take away from her own contributions to her music. At the same time, she has also not handled the controversy in the best of ways. Last year, she initially stated that she has had nothing but positive experiences working with Dr. Luke, and that she wanted her fans to know that she would never work with someone who she believes to be an abuser of women. (So, Kesha is a liar then? That’s what we want to go with in this groundbreaking era of Me Too and Time’s Up? Alright then.) Then, a few months later, she sort of apologized on Twitter for invalidating Kesha’s claims, writing, “While I’ve been open and honest about my positive experience with Dr. Luke, that does not negate or dismiss the experience of others or suggest that multiple experiences cannot exist at once.” Whatever the case, a new female pop singer’s choice to work with someone who multiple different artists have given testimonies against, in our current era of political correctness and believing victims, feels uninformed and ignorant. The fact that the pop music fandom continues to praise Petras for being openly and authentically trans feels like it’s being cancelled out by her choice to work with someone accused of abusing women, another minority. Many Petras fans are quick to point out that her decision to work with Dr. Luke shouldn’t matter, since he is still making money off of many of our favorite pop tunes from the 2000s and early 2010s, and even Kesha’s post-lawsuit album Rainbow. I also don’t think boycotting Petras’ music is the solution either. The solution would be to ask more of Petras as an artist and a public figure, to remind her that her choices have often detrimental consequences and implications, and that while being trans might not define who she is, it might work in her favor to support all minorities, including women accusing powerful men of abuse.

Again, I’m not about to act like I don’t enjoy a number of auto-tuned pop songs that celebrate dancing your troubles away. But I’m also not about to pretend like I think these songs are going to change the music industry merely because I think some of the songs are awesome, and the artist is trans. A lot of other gay fans like to pretend that singers like Petras and Charli XCX have amazing, flawless vocals, when these two singers in particular enjoy making copious use of auto-tune in their songs. Once again, there is not a single ounce of judgment on pop singers like Petras for using auto-tune to create a certain desired effect for a certain song, since listeners like me almost always enjoy the results. But when you are using things auto-tune in your work to channel the energy of an eighties song, or something by Madonna, Britney, or Kylie, it leaves very little room to believe that you are interested in pushing boundaries. Petras doesn’t have to push boundaries to be interesting, but in order to “save pop music” in the way that most gay fans suggest, pushing boundaries and creating your own sound that is not overly reminiscent of past eras is, again, a necessity.

Songs like “I Don’t Want It At All” or “Heart to Break” might have seen massive success in terms of number of streams on Spotify, but they didn’t break the barriers of other mainstream music charts outside of the streaming world. I would be quicker to name someone like Ava Max as an artist who could potentially “save pop music” in the way that these fans suggest, since she has already achieved a worldwide number one hit with her song “Sweet But Psycho”—something with clear influences from the past, but with an open nod to the future. At this moment in time, it feels as though Kim Petras isn’t equipped to become the era-defining star her LGBTQ fanbase desperately craves. I don’t want to undermine her role as a trans artist who has managed to be her authentic self on record and in concert. But, in the context of our contemporary pop music guidelines, she needs to give us more than some fun-loving, auto-tuned pop songs, produced by a man who has been given a bad name by many of the same 2000s pop artists that Petras is trying to mimic. Mimicry is fun when you want to sing and dance, but if you want to fulfill the title of future of pop, you’re going to need a little more depth.
Posted by Jeffrey Davies on 7/15/2019

“I'm always amazed that people will actually choose to sit in front of the television and just be savaged by stuff that belittles their intelligence.”
—Alice Walker

“The goal is to make a space where a few ideas and images and feelings may be so arranged that a reader will want to linger awhile among them, rather than to flee.”
—Janet Malcolm

“There isn’t much to say for the life of a critic. In the first place, it is entirely too spotty. There are long, quiet stretches where he hasn’t a thing to do with his evenings, and then there are sudden outbursts of such violent activity that he nearly succumbs to apoplexy.”
—Dorothy Parker

Jeffrey Davies
Jeffrey Davies is a professional introvert and writer with imposter syndrome whose work spans the worlds of pop culture, books, music, feminism, and mental health. Follow him on Twitter @teeveejeff and Instagram @jeffreyreads.